Stay Connected!
Anyone who thinks doing a fashion blog is a piece of cake, has obviously never attempted to maintain a fashion blog. Prior to beginning this endeavor I looked at blogs and saw all the wonderful closets of these perfect women, and found myself guilty of wishing for more expensive brands/items in my closet or wishing I could change things about my appearance. Don’t get me wrong, I adore their blogs (and I am certain that was by no means their intention), but I never wanted anyone to visit my blog and feel this way. I want my readers to be inspired, to find their inner creativity and to collaborate on something we all know and love – fashion!
So while the pictures on my blog may be the best of the shoot, trust me when I say that the better photos were far and few between. So to show you that I am just an average everyday gal, get some popcorn, settle in and prepare for a laugh or two at these “bloopers” from my previous blog posts. 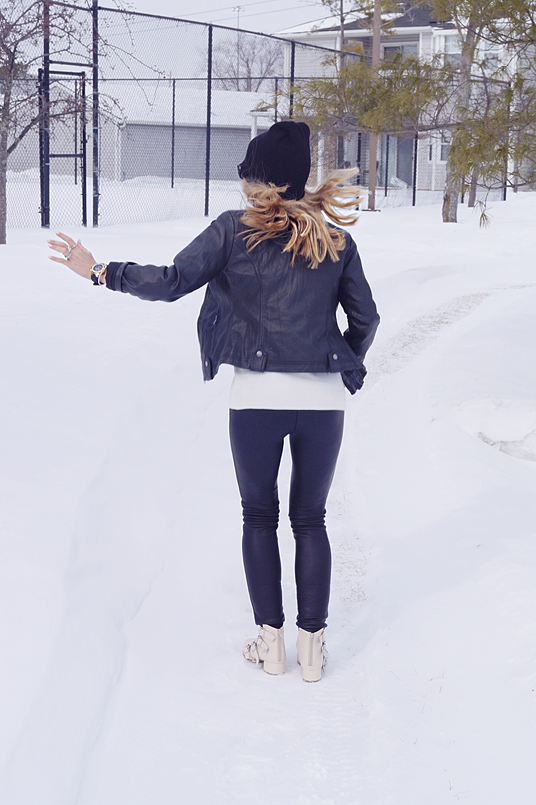 “Starting a fashion blog in the winter is a bad idea…It’s COLD!” 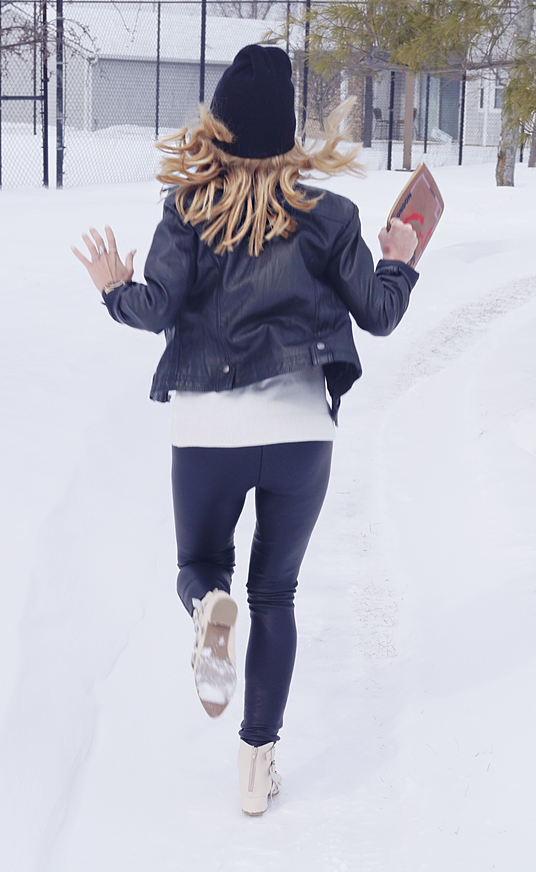 “Shoot over? Sweet..time to breakdance!” 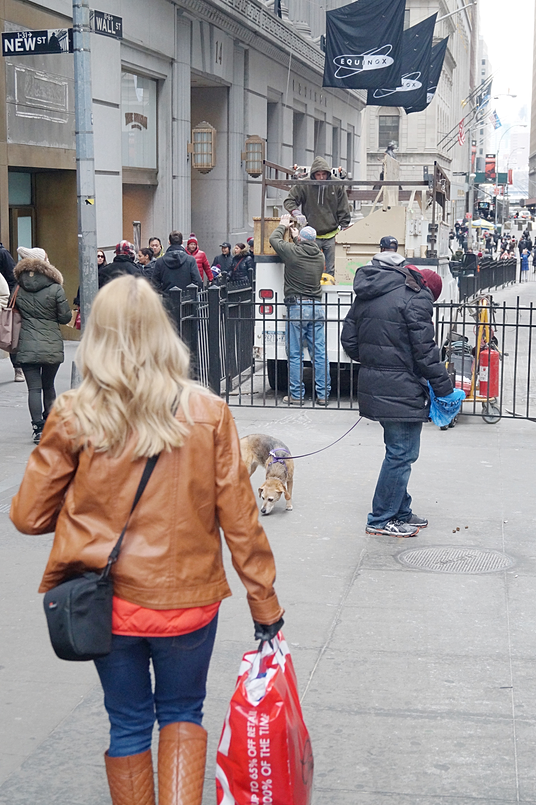 “Please disregard the man picking up the dog poo in the background. At least he’s picking it up?!” 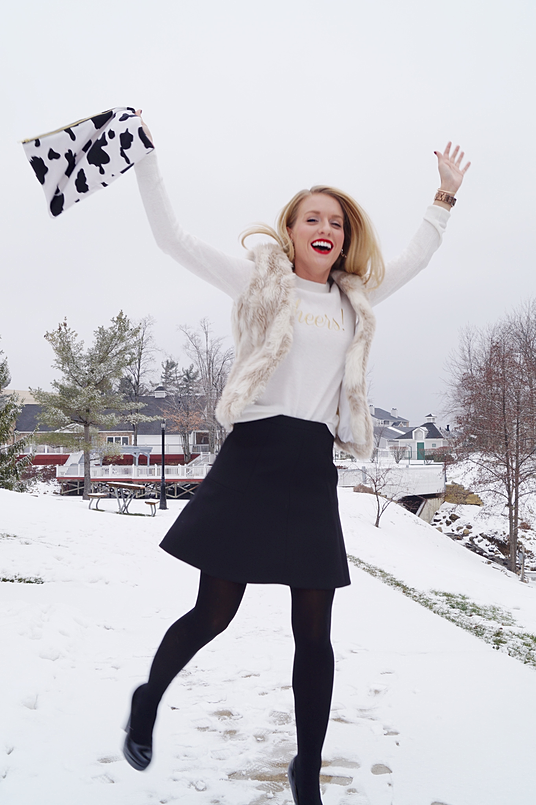 “I wonder if I can jump in these heels in the snow? Yea..no..that’s a bad idea.” 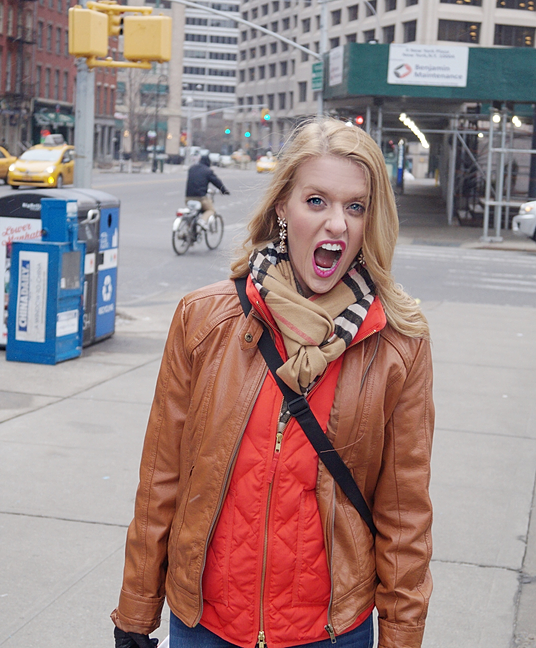 “Joe I swear if you take one more picture I am going to SCREAM!”
Now remember, I am just your average everyday gal – with flaws (plenty of them) and a budget. Hope you enjoyed!

Awards season has come to an end, but not without some stunning beauties on the red carpet last night. If you are looking to see Dakota Johnson at the top of my best dressed list…guess again. Aside from the fact I didn’t care much for the one shoulder red gown, her attitude and personality during the red carpet interview was as disappointing as her ponytail. To me, one of the best things a celebrity can wear on the red carpet is a smile. It’s the one thing a designer or jeweler can’t give you and it either makes or breaks the look….so read on to see which celebs I thought were the total package last night!
Lady Gaga 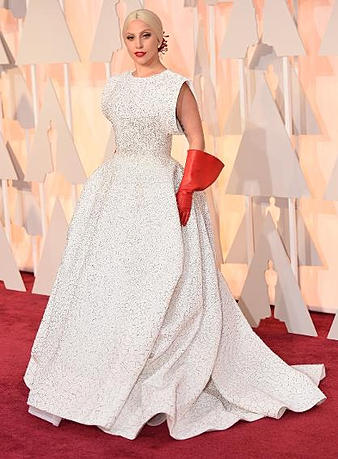 Who knew Lady Gaga was so stunning when she isn’t wearing an egg as a dress?! And her performance for the Sound of Music…say what?! She blew me away last night. Not only with her gorgeously structured white piece of art, but with her vocals during her performance. She could have done without the red leather gloves, but it wouldn’t be Lady Gaga without a little twist, right?
Sienna Miller 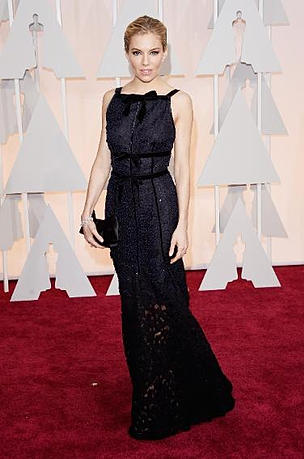 I imagine I’ll be spending all next weekend trying to figure out how to duplicate Sienna Miller’s hairdo at the Oscars. I loved it! It was young, but appropriate and most likely needed, due to yesterday’s weather. Put that blonde braided hair with this navy and black lace gown, and her blue eyes… It’s too much for me to handle!
Reese Witherspoon 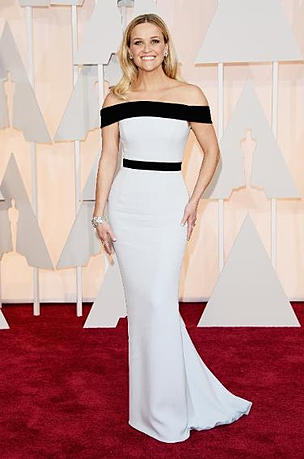 I love her…literally everything about her. She is so inspirational to young women, on top of being an absolute beauty. This white gown with the black details looked stunning on her and despite last night’s rain, I appreciate that she wore her hair down. She looked classic, timeless and perfect.
Rosamund Pike 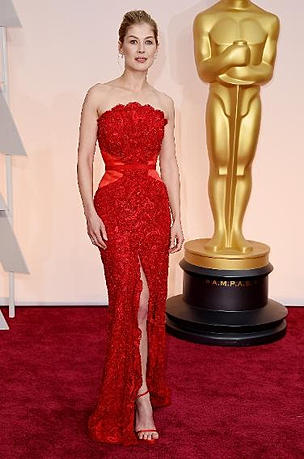 Do I even need to write a caption as to why Rosamund Pike is on my best dressed list? Her red lace gown on her perfectly pale complexion was to die for. I loved her in Gone Girl, but that movie did her no justice for how beautiful she looked last night. Oh and good for her for not rocking an absurd amount of jewels. The dress spoke for itself and I appreciated she didn’t clutter it with too much jewelry.
Emma Stone 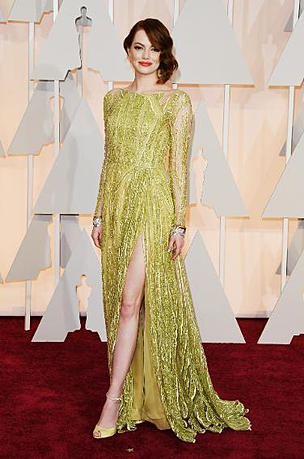 And the award for best dressed goes to….without a doubt, Emma Stone. Her look was perfection. From the backless gown, to the fun color, to the sequins, to her hair and her gorgeous orangish lip. Her (and her stylist) nailed it last night! And can I just say how humble she is when she speaks?! Yep, she definitely stole my heart last night…and I want to steal that dress!
Want these looks for less? Who doesn’t! Check out the links below to see these looks at a fraction of the cost! 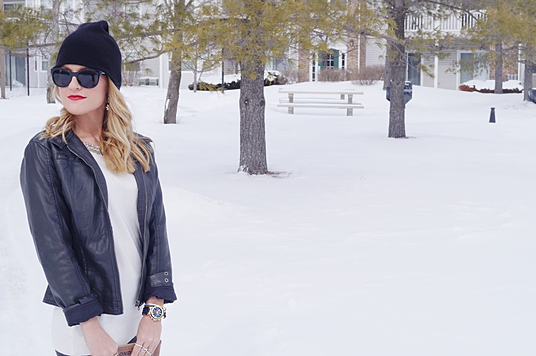 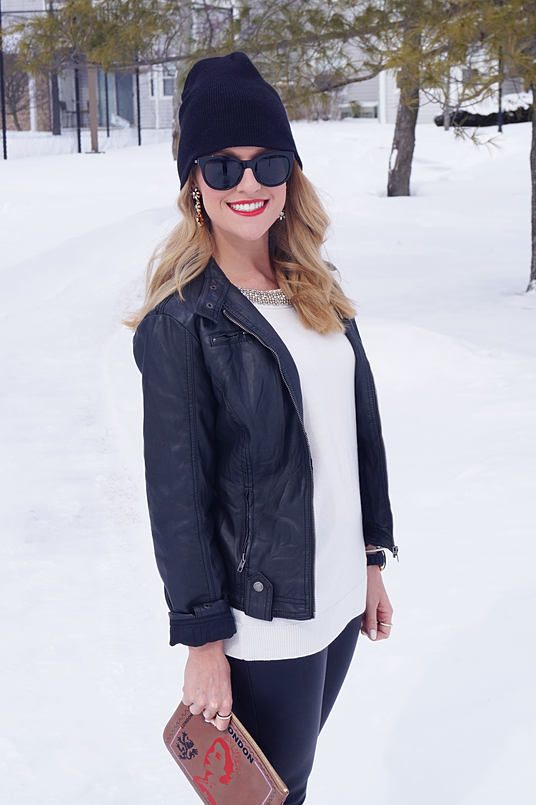 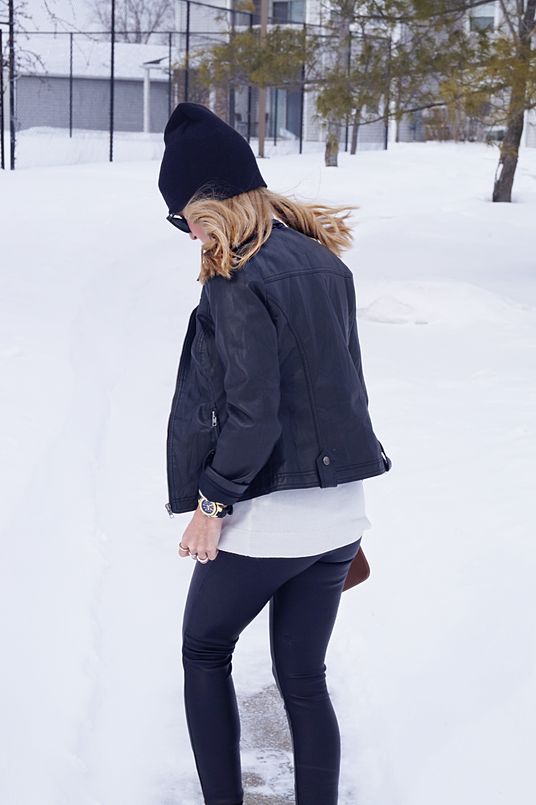 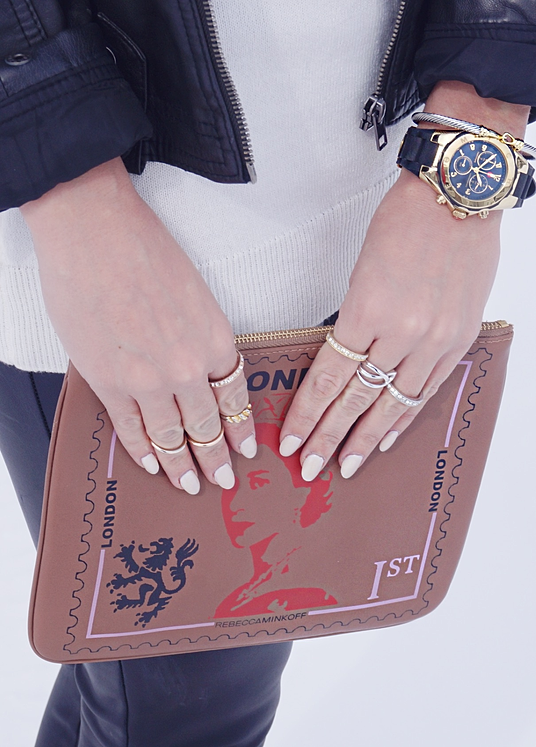 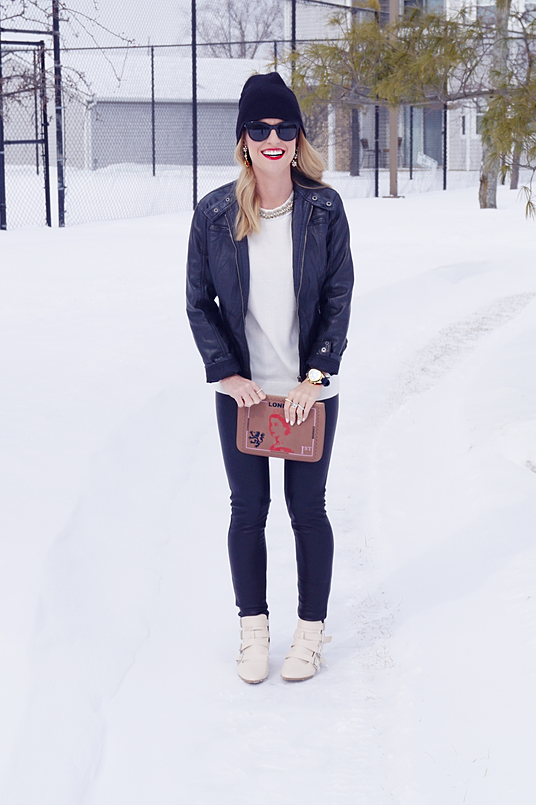 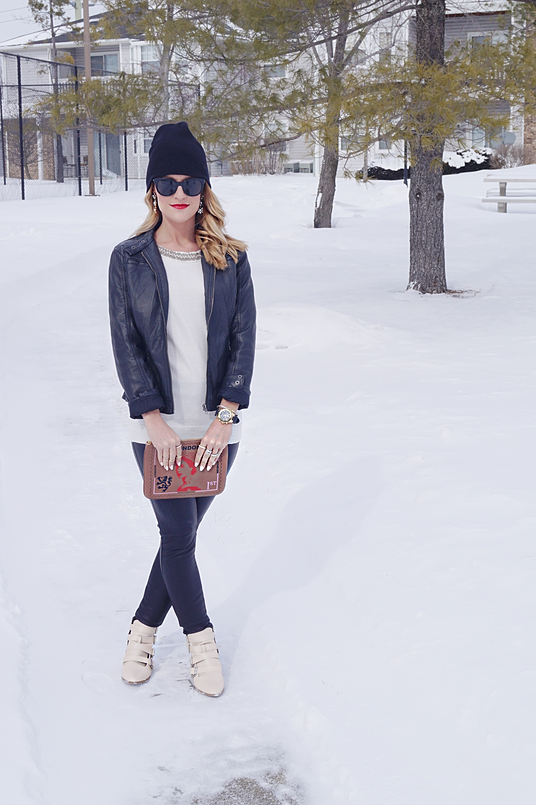 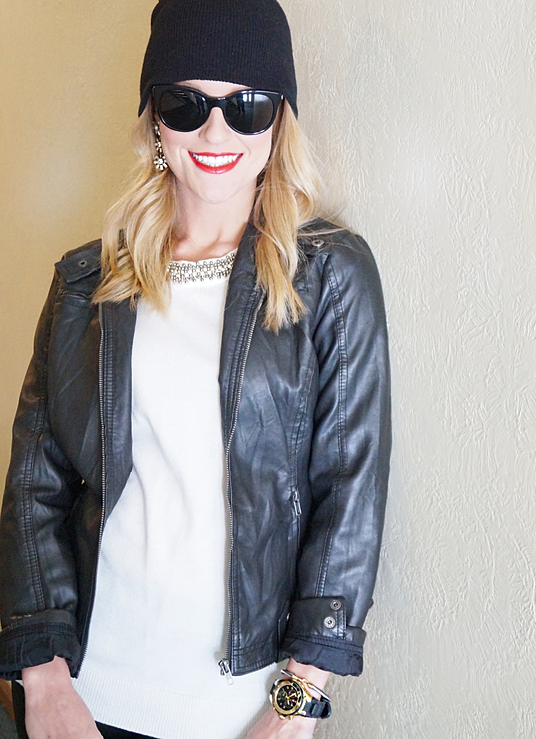 Winter shows no signs of letting up anytime soon, and I cannot even fathom another day of snow.  There are no words to express how much I loathe snow and cold weather and yet somehow I managed to move north. Aside from the damper this winter wonderland is taking on my mood, it’s also seriously affecting my fashion. No heels, boring coats and scarf after scarf after scarf.
Don’t get me wrong, I love a good scarf and stylish coat…for about the first week that I wear them. Then I’m over it and it becomes the same old, same old every dang day of these ridiculously long winters. Today I gave Mother Nature a little piece of my mind with this leather look. I always picture leather being worn by someone with an attitude and a little sass (good thing I have both, huh?!), so I needed an outfit that was just warn enough to be outside, with a big side of defiance. So take that Mother Nature! Now bring me some warm weather and sunshine.
Anyone else tired of snow and cold?! 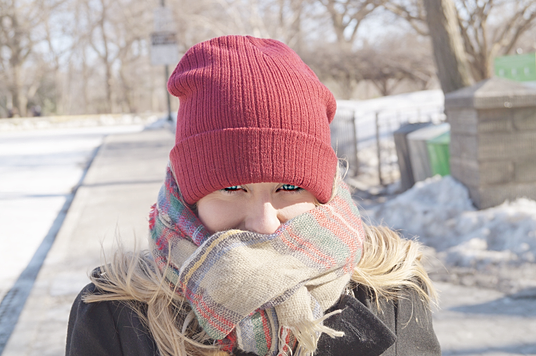 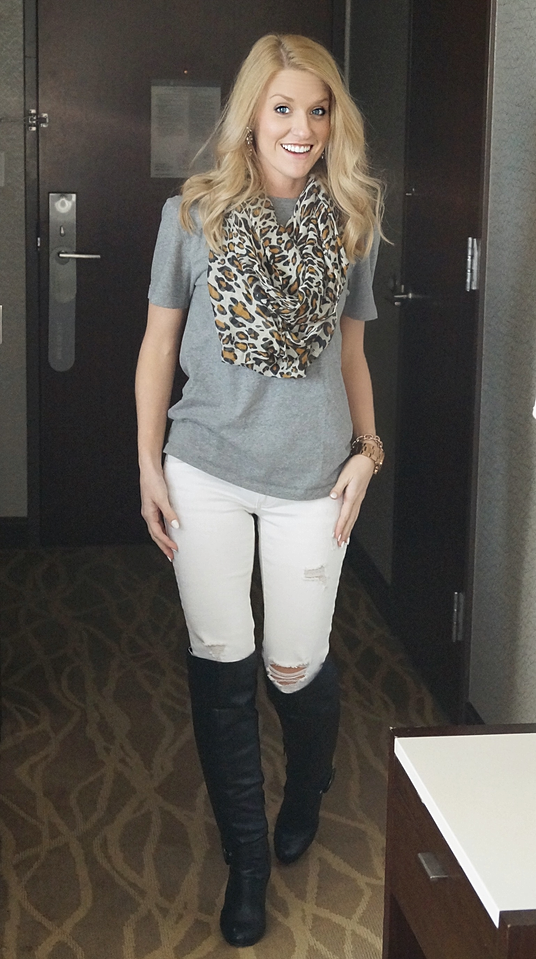 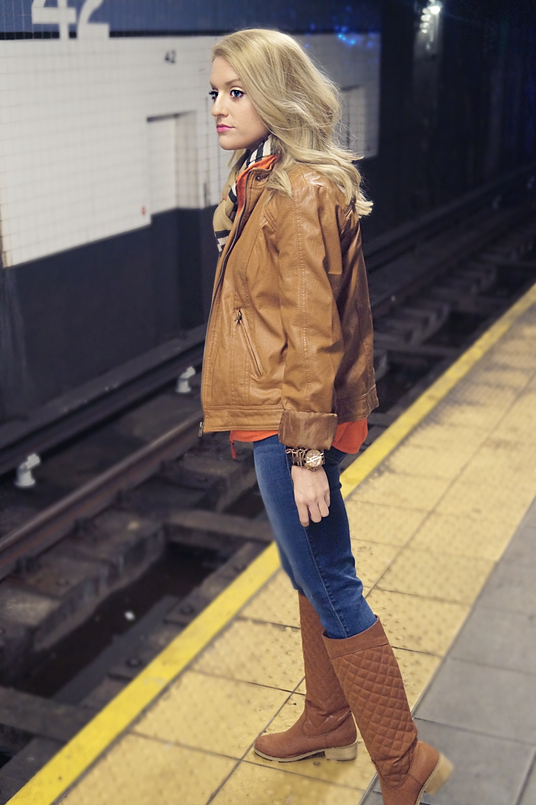 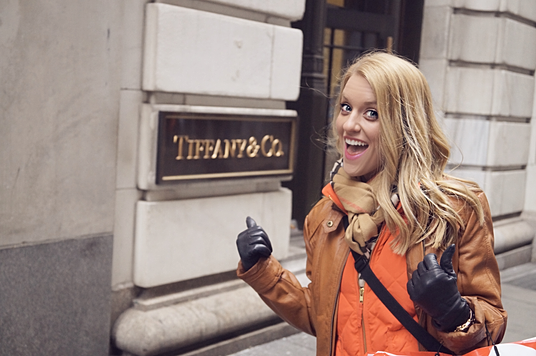 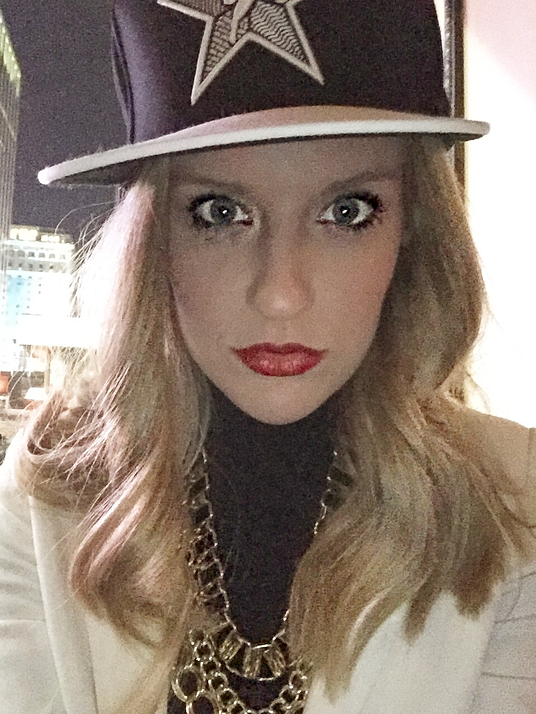 I just got home from New York and while I was there during New York Fashion Week, I didn’t actually get to attend the shows (bummer right?!). But I did get to attend the NBA AllStar events and shop at Century 21, so that’s almost as good as fashion week in my book.
After some very long delays (thanks, Delta), we arrived in NYC around 4 on Friday. We started the trip with a delicious brie burger at Pigalle in Times Square. This was one of Joe’s favorite places to eat the numerous times he’s been to NYC, and I can totally understand why…the burger was delish! That night, we went to an NBA AllStar Party, hosted by TNT in which we saw Jon Bon Jovi perform. I wore a similar outfit to the second picture (sorry no pics), but I wanted to wear my thigh high leather boots for added warmth since NYC was bone chilling!
The second day, Joe and I took the subway to the World Trade Center memorials and it is completely astounding to see! When I was in NYC last, they were still cleaning up the damage from 9/11, so seeing the completed memorials in all there beauty made me feel patriotic and proud to be an American. Next we walked to Century 21 and while there are no other store locations outside of the few in New York and New jersey, there is an online store that I highly recommend checking out. I could have spent a fortune in that store, but had to shop wisely considering how much I had already packed! Safe to say I stocked up on some real goodies y’all will see in future posts.
Saturday night, we went to the NBA Allstar Skills Competition and we watched the three point shoot out and the dunk contest. It was fun to see the celebrities that were there and see some pretty awesome dunks! Ella Henderson performed her single, Ghost, and that girl has a phenomenal voice!
The last day, we met up with some friends and went to Little Italy, ChinaTown and to Central Park. It was a bitter cold day so being outside was difficult (I’m sure you can guess which picture was from that day!). The wind and cold weather had my hair looking a hot mess so that night, when we went to the NBA AllStar game, I needed any available hat to help hide the hair. I’m not one to wear baseball hats unless I’m slouching it for the day, but I thought I would have some fun with it and added a bright red lip, leather pants and my thigh high boots again.
Overall, it was one of the best trips I’ve taken. I love New York….up close and personal it isn’t the prettiest city (I mean, the trash is on the side of the street), but the charm of the city is something that makes NYC top on my list.
Have you been to New York? What’s your favorite part of the city?

This year, Joe and I will be in New York for Valentine’s day, which is gift enough, but that hasn’t stopped me from eyeing down some goodies that I can buy for myself. These gifts are all wallet-friendly (I’m talking under 50$) and the perfect way to say I love you…to yourself! *Click on the images to see where to get each of the items.
Tory Burch for FitBit

I love my FitBit, but those silicone bands are really hindering my fashion. I thought about purchasing the Tory Burch gold bracelet option, but a quick skim of the reviews on her website had me second guessing whether the $195 price tag was worth it. That said, I stumbled across the newest addition to the Tory Burch for FitBit line…the silicone band. Yes, it’s still silicone and it may still clash with some outfits (especially for work), but it’s Tory Burch and it’s less than $50 bucks…enough said.
H&M Short Coat 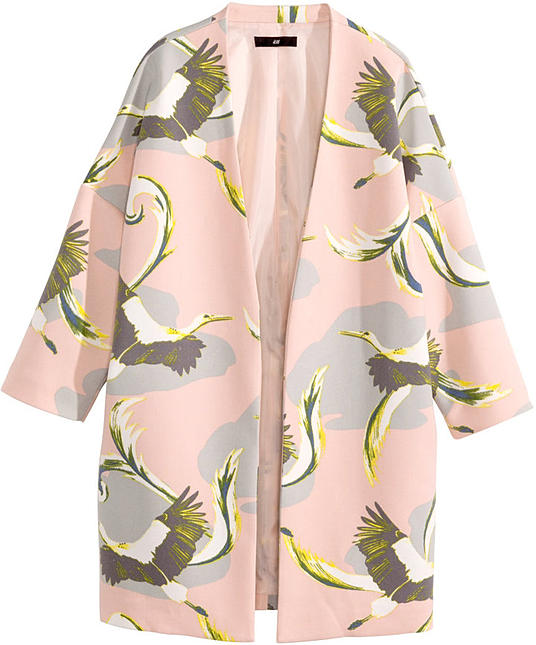 H&M has done it again. This coat is perfect for spring, which I am really hoping comes early this year despite what the groundhog said. Nevertheless, I can just see this perfect powder pink short coat, paired over a classic ivory dress, or for some added flair –  jeans, some gray over the knee boots and a cute sweater. Either way, this beauty is on my wish list..and for less than $50 bucks, it’s not going to last long!
Tartelette 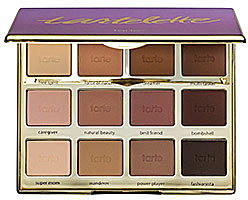 I have been eyeing these palette since I saw it mentioned on a fellow bloggers page, caraloren.com (by fellow I actually mean she is a huge name in blogging  and is worth checking out if you haven’t already). For less than $50 bucks, I don’t know why I haven’t picked it up yet. I’ve admired it on three seperate occasions at Ulta and once tried to talk Joe into buying it for me for no reason at all (he’s seen my makeup collection – he knows better!). I am thinking this is the perfect item to buy while in New York this weekend – if for none other than no sales tax. Done and done!
Shiraleah Clutch 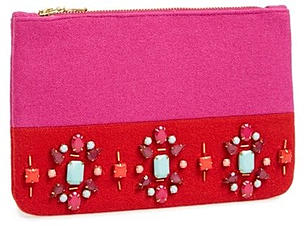 It’s pink, it’s read and it’s bejeweled. This clutch is practically screaming “BUY ME FOR VALENTINES DAY!”. And even if I don’t get it in time to use this weekend, who cares?! It’s a fabulous clutch that will get use all Spring and Summer. Nevermind my recent obsession with buying clutches. For less than $50 bucks, this is a must in my shopping cart!
Kate Spade Tumbler

Water is vital to our survival, so why not sip it from a fun and cute tumbler?!  Am I right? Plus I like drinking from a straw, weird I know. The “break the ice” slogan is practically begging me to just give in and purchase it already, which for $18 dollars, I mine as well do. And as an added bonus, this is going to be the perfect companion for my long train rides when I move back to Chicago!
So there ya go, 5 super cute, super cheap Valentine’s gifts for yourself. And if your significant other asks, exchanging gifts “just isn’t in the budget this year”. Now take that money saved and invest it in some of these babies! I happen to think that it’s a brilliant idea 🙂
What do you think?

No images found!
Try some other hashtag or username